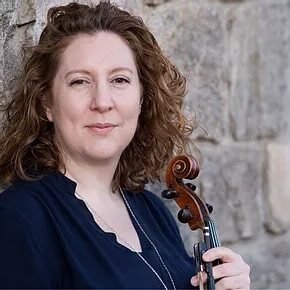 Sarah attended the Royal Birmingham Conservatoire where she received a BA with honors and continued her studies at the Guildhall School of Music and Drama in London. Her musical studies eventually took her to the Hartt School, where she studied with the Emerson String Quartet and obtained her MM in viola performance, also her Suzuki teacher training with Linda Fiore and Teri Einfeldt. Ms. Smale has won several awards, including the Birmingham Conservatoire string quartet scholarship and the Herbert Lumby Viola prize. She has worked with world-renowned artists such as Pierre Boulez, Yuri Bashmet, Nicholas Kramer, Steve Reich, Sir Simon Rattle and Valery Gergiev. Her experience includes numerous concerts and seminars with talented quartets and orchestras including: Takacs Quartet, European Chamber Opera, Russian National Ballet, and the Emerson Quartet, to which she was the assistant while in Hartford. Ms. Smale has also played with numerous choral societies as principal viola, recorded television work for the BBC, and recorded extensively for Radio Suisse. She also performs with L’Orchestre des Jardins Musicaux in Switzerland, where she is principal viola. Sarah is co-director of the White Mountain Suzuki Institute at Ogontz in New Hampshire and is in demand as a guest teacher at various workshops and summer institutes around the country.