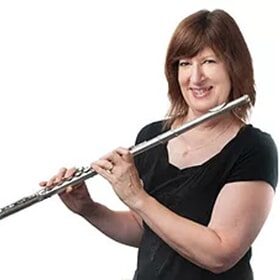 A native of Wilmington, Delaware, Leslie Waddell studied flute, theory, chamber music, and orchestra at the Wilmington Music School as a child. Her joy of learning and performing quickly became a passion for teaching and coaching, a career which began in her teen years and has continued for decades. Leslie’s enthusiasm reaches beyond simply musical instruction, encompassing an understanding of the value of using our innate abilities and love of music, movement, rhythm, patterning, and social interaction to support all learning domains, strengthen the family bond, and to foster empathy, compassion, and self-esteem. Since becoming a Licensed Kindermusik Educator in 1999, Leslie has taught developmental music & movement, theory, music appreciation, flute, and piano in her private studio. Leslie has served on the faculty of Fairfield University and the Neighborhood School of music, and was interim professor at UMass Amherst.

Leslie earned her Bachelor’s Degree from the New England Conservatory where she studied with Claude Monteux and Lois Schaefer. After winning the prestigious James Pappoutsakis Memorial Flute Competition in Boston, she went on to hold positions with the Portland Symphony, the South Dakota Symphony, and the Rhode Island Philharmonic . Leslie is currently an active freelancer and a member of the Ridgefield Symphony.