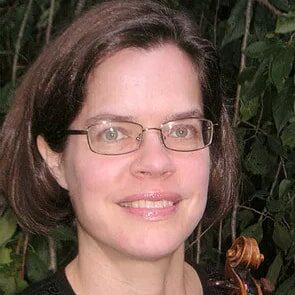 Nina Crothers, a native of Northford, CT, began her violin studies at the Neighborhood Music School in New Haven under the Suzuki method. She graduated magna cum laude from Yale University, where she was given the Bach Society Prize for excellence in music. She received her MM from the Juilliard School and her DMA from the Manhattan School of Music, where she was awarded a cultural grant from the American Scandinavian Society for her research on Finnish violin music. Her principal teachers were Sylvia Rosenberg, Joseph Fuchs, Syoko Aki, Louise Behrend, and Jeanne Switzer. She also studied chamber music with Felix Galimir and members of the Tokyo and Juilliard String Quartets.

Dr. Crothers has been on the faculty of the Suzuki Music School of Westport since 2005. Prior to that, she was chair of the String and Theory/Literature Departments at the Turtle Bay Music School in New York City, where she taught violin, chamber music, theory, and music history and served as director of the school’s Certificate Program. During her sixteen-year tenure at TBMS, her students were accepted to programs at Juilliard, Mannes, the Manhattan School of Music, and Tanglewood, as well as schools such as Yale, Harvard, and Princeton. She is also a former faculty member of Fairfield University, the Luzerne Music Center, and the Greenwich House Music School. In the spring of 1994 she served as violin coach to the actress Isabella Rossellini for the film Immortal Beloved. Dr. Crothers received her Suzuki training at the Mid-Southeast and Hartt Suzuki Institutes.

An active freelance musician, Dr. Crothers has performed throughout New York and the Northeast. She has been concertmaster of the Wallingford Symphony Orchestra since the spring of 1988, and she serves as assistant concertmaster of the Bridgeport Symphony, principal second violin of the Norwalk Symphony, and as a regular substitute with the Ridgefield Symphony. She has also performed as concertmaster of the Berkshire Bach Ensemble under the direction of both James Bagwell and Frank Nemhauser, and she has recorded the Brandenburg Concerti of J. S. Bach with the same group under the direction of harpsichordist Kenneth Cooper. She resides in Fairfield with her husband and twin daughters who also play the violin.