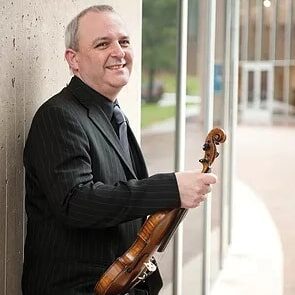 Andrew is Music Director of the Suzuki Music Schools of Westport and Orange. A prizewinning violinist and graduate of the Royal Academy of Music, UK, Andrew made his London Debut at the Royal Festival Hall in 1992 and upon graduating conservatory was appointed Concertmaster of the Orquestra da Norte, Portugal. After a brief period in his early twenties playing as concertmaster with various London orchestras and directing the new music ensemble “Rubicon”, he moved to the US to complete a doctorate as assistant to the Emerson Quartet and a student of Ida Kavafian.

Andrew has performed as a soloist with orchestras throughout Europe, North America and China appearing on television and radio in the UK, Italy, Portugal, China and on US Public Radio and Television. He has performed in concert for the Dame Myra Hess Concerts, The British Embassy in Paris, St Martin-in-the-Fields, The Chicago Cultural Center, Chicago Symphony Hall, the US Coast Guard, The American Liszt Society, ASTA, MTNA and many more. He has had extensive experience as a concertmaster throughout Europe and the US, working with such conductors as Helmut Rilling, Sir Simon Rattle, Sir David Wilcox, Sir Colin Davis, Gunther Schuller, John Corigliano, Vaclav Neumann among others. He has premiered numerous works by composers in the UK, US and Holland and performs as violinist of the Castillon Trio, ensemble-in-residence at the Stamford International Music Festival, UK. Andrew has recorded for Sony Classics, Silva, ASV and VUCA labels and he has recorded solo soundtracks for the Hartford Stage Company and Yale Repertory Theater. He runs the internets leading film and television string recording company and can be heard on lbums, films and television around the world. His release of the complete Beethoven Sonatas in 2016 received a special commendation from the American Prize for chamber music. He is currently preparing a follow up album of the complete Mozart sonatas with renowned pianist Joshua Pierce.

As a teacher he has taught on the faculties of Valparaiso University, St Joseph’s College, and has given master classes at the Shanghai Conservatory, San Francisco State Univesrity, SUNY, Andrew’s University, Florida Gulf Coast University, the Hartt School of Music, Winston Salem State University, Radford University and in colleges along the East Coast. He has appeared twice as guest artist for the American String Teachers Association. As Head of Strings at Valparaiso University, Dr. Smith founded a long-term Suzuki Teacher Training Program in collaboration with Talent Education Specialist, Ed Kreitman, with whom he recieved his Suzuiki Training. He is Director of the Stamford International Music Festival in England, a summer chamber music camp for gifted young professionals and students and is recognised in “Who’s Who”. Recently he founded the Suzuki Association of Southern New England.

Andrew’s specialist area of research is the cross-fertilization of art music and poetry in post-impressionst era. He completed his study at the Conservatoire Royaux des Beaux Arts, Brussels focusing on the virtuoso violinist Eugene Ysaye.