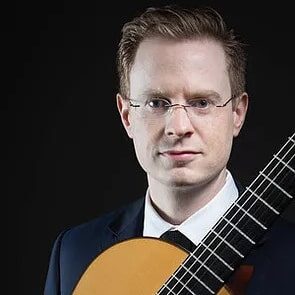 Described by the Hartford Courant as “a guitarist for music lovers to catch”, Seattle native Daniel Corr is active as a performing classical guitarist across North America and beyond. Highlights of his career include performances of major guitar concertos with the American Classical Orchestra of NYC, the Waterbury Symphony, Seattle Creative Orchestra at Benaroya Hall, and with the Auburn Symphony. He has been a featured solo recitalist at universities such as Villanova, UW Milwaukee, UK Lexington, MSU Bozeman, and at the Beijing Central Conservatory. A passionate chamber musician, Daniel can be frequently seen in concert as a member of the Apollinaire (flute, viola & guitar) trio and the New Haven Guitar Quartet. As a vocal accompanist, Daniel was chosen to accompany singers in a master class for the great Spanish mezzo-soprano Teresa Berganza, which was broadcast on RTVV Spanish television, and collaborated with the Connecticut Chamber Choir on an entire program of music for choir and guitar in 2016. Daniel also performed on the Connecticut Style show on ABC affiliate channel WTNH in 2013.

Daniel’s musicianship and artistry have been recognized at several competitions including the 1st prize at the 12th Northwest Guitar Competition held at the University of Idaho, a top prize at the SUNY-Potsdam Crane New Music Solo Performer Competition adjudicated by composer George Crumb, and as the recipient of Yale’s prestigious Eliot Fisk Prize as the “outstanding graduate in guitar” in 2001. In 2006, he was honored with the Certificate of Excellence from the Connecticut Academy of Arts and Sciences.

Daniel is the recipient of three degrees in guitar performance. He earned the Master of Music and the Artist Diploma degrees from the Yale School of Music under Benjamin Verdery, where he was awarded Eliot Fisk Prize as the “outstanding graduate in guitar,” and was honored to perform a solo recital at the 2016 Yale Guitar Extravaganza. His Bachelor of Music was done at Cornish College under Steven Novacek. Daniel has had other private studies with Rene Izquierdo and Jorge Caballero. Additionally, he has performed in scores of master classes for nearly all of the most familiar names of the classical guitar world from the nineties and the aughts, and trained at summer programs such as Aspen and for four years at Le Domaine Forget.

Daniel serves as a Lecturer of Music in guitar at Gateway & Housatonic Community Colleges in Connecticut, and is on the classical guitar faculties of the Suzuki Music School of Westport. He also taught at the Usdan Center for the Creative and Performing Arts and the Elm City ChamberFest. As a scholar of guitar literature and pedagogy, Daniel has served on panels at Yale University and has been published in Soundboard, a periodical of the Guitar Foundation of America. His own students have one 1st prizes in the Columbus and Salisbury national youth competitions while under his tutelage. He received his Suzuki training at the Hartt School.