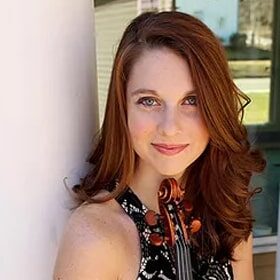 Celine Dean is a violinist and Suzuki instructor whose teaching is versatile and dynamic. She holds a Bachelor of Music degree in violin performance from Belmont University and a Master of Music degree from The Hartt School where she received her long-term Suzuki training in Books 1-8. Her teacher trainers include Teri Einfeldt and Christie Felsing. She has studied with teachers such as Elisabeth Small and Anton Miller, whose tutelage is traced to Juilliard pedagogue, Dorothy Delay. In addition to her long- term training work, Celine has furthered her professional development by attending workshops with Edmund Sprunger, Ed Kreitman, Alice Joy Lewis, Ann Montzka-Smelser, Linda Fiore and Winifred Crock.

As a performer, she has played with the Wallingford Symphony and Waterbury Symphony Orchestra, as well as other groups in the region and in the southeast. In the past, she served as concertmaster for the Upper Valley Chamber Orchestra. During the summers of 2013 and 2014, she attended the National Music Festival as an apprentice.These orchestral recordings can be heard on National Public Radio and PBS.

Celine has been a teaching assistant and chamber music coach at the prestigious Interlochen Summer Arts Camp and held the role of Assistant Director forString Crossings, a high school level camp based in Nashville, Tennessee that combines classical and commercial styles. Fiddle music is often incorporated into her teaching style and into workshops alongside her husband. Celine has taught violin and group classes in the New England area at the Sound Crossing Music School, the Ethel Walker School, the Upper Valley Music Center, K.E.Y.S., the Vermont and Guilford Public Schools.