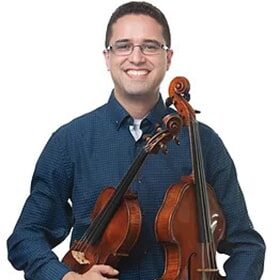 Rafael Videira holds a Doctoral degree (DMA) in viola performance with emphasis in violin/viola pedagogy from the University of Oregon. He also holds a Masters degree in performance from the University of New Mexico, where he completed his Long Term Training in the Suzuki Violin method with Prof. Susan Kempter, a registered Teacher Trainer with the Suzuki Association of the Americas.

He has taught violin, viola, group classes and orchestra at the University of New Mexico Violin Lab School, the University of Oregon Community Music Institute, and elementary school string classes through a program sponsored by the Eugene and Springfield Youth Orchestras. Dr. Videira has also served as faculty member in many Summer Festivals in Brazil, Mexico and the USA, and served as Assistant Director at the Northwest Suzuki Institute.

Dr. Videira has played in numerous master-classes, taught by Ori Kam, Richard Young, Wilfrid Strehle, Naomi Seiler, Soon-Mi Chung, Peter Borck, Maxine Neuman, and John Graham. As an orchestra musician, he has played under the direction of maestro Kurt Masur, and has been a member of many ensembles in his native Brazil and in the USA. During the Summers of 2016 and 2017, he was an international audition winner to be part of an orchestra performing Cantatas by J. S. Bach with maestro Helmuth Rilling, in the cities of Weimar, Erfurt, Leipzig, and Eisenach, in Germany.

In 2018, Dr. Videira was awarded the Suzuki Association of the America’s Certificate of Achievement, designed to recognize teachers committed to excellence in teaching and to establishing standards within the frameworks of the Suzuki philosophy.

He has published with the Suzuki Association of the Americas (American Suzuki Journal and Parents as Partners Online) and the Yost Family Trust. For more info, visit www.RafaelVideira.com.