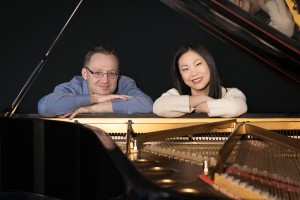 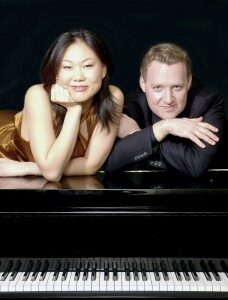 Recent performances include their Lincoln Center debut with Igor Stravinsky’s Rite of Spring; collaboration with Philadelphia’s Orchestra 2001 in a complete performance of Frank Zappa’s The Yellow Shark and Symphony Space’s Wall to Wall Bernstein, a marathon celebration of Leonard Bernstein’s 100th anniversary.

The duo’s 2017 recording of Johann Sebastian Bach’s The Art of Fugue has garnered tremendous praise; Stephanie and Saar toured The Art of Fugue extensively with stops in Portland, Sacramento, Phoenix, Baltimore, Philadelphia and New York, among others. Their recording of György Kurtág’s four hand transcription of Bach’s Gottes Zeit ist die allerbeste Zeit (God’s Time is the Very Best of Times) was featured on the soundtrack of the documentary film Red Trees. Beethoven Dialogues, their 2014 album featuring Beethoven Quartets Op. 18 Nos. 1, 4 and 6 in rarely heard four hand arrangements, was chosen as Album of the Week on New York Public Radio WQXR.

Stephanie and Saar are the artistic directors of Makrokosmos Project, a contemporary music festival in Portland, Oregon featuring American music and Oregon-based musicians. Highlights of the 2015 inaugural festival include standing-room performances of George Crumb’s complete Makrokosmos I & II and Celestial Mechanics. Oregon Arts Watch frankly states “It was one of 2015’s peak Oregon musical moments.” Makrokosmos Project has since presented the entirety of Crumb’s Makrokosmos I-IV and premiered works by Gerald Levinson, Branic Howard and Gregory Hutter.

A favorite of families throughout the region, the Children’s Pillow Concert Series is part of the Suzuki Schools’ Community Outreach Program. Co-Sponsored by WSHU Radio, an NPR station, the concert series is completely free to the community and features both national and regional artists, performing serious music in an informal setting designed for all the family. Children of all ages bring a pillow and get up close with the performers allowing families a chance to introduce their children to top quality performances.

We welcome up to 50 audience members in person to the concert, which will also be streamed live. The concert is free, though we do suggest a minimum donation of $20 to support our mission and tickets must be purchased in advance.